Charlotte came to see Dr. Edinger in January 2014 because of long-term chronic upper respiratory infections (URI's), and a constant runny nose. In June 2013, the facial nerve was damaged on the right side, causing partial paralysis of the right side of her face. Around that same time, Charlotte developed infections in both middle ears (the middle is a bony compartment next to the skull called a “bulla”). At times these infections made Charlotte lethargic and unwilling to socialize.

After multiple antibiotic trials during the summer and fall of 2013, Charlotte visited Dr Edinger to find out about her surgical options. She signed up for bilateral ventral bulla osteotomies (VBO). A VBO is a meticulous surgery that opens the middle ear and allows for removal of polyps and infected debris and takes away the “hiding place” for infection. At the time of surgery the middle ears were found packed with infected debris. The bone of the middle ear (“the bulla”) was so thinned by infection that it was close to bursting. The deteriorated bone and all of the debris were removed. Temporary drains were placed from the cleaned out bullae to exits on the underside of her neck. Dr. Edinger also flushed Charlotte’s nose extensively with saline and a long catheter. The flushing removed a lot of mucus and purulent (infected) material. She recovered very well from anesthesia and was sent home on an antibiotic for the following two weeks.

At her two-week recheck Charlotte's ear canals were clean and there was no swelling on her neck near the VBO surgical sites. She still had some nasal discharge but it was significantly less than prior to surgery. Recently Charlotte's family reported great news: there is very little nasal discharge and she has returned to her playful and active lifestyle at home. Now she is even more affectionate!

“My husband and I look at her every day and comment on how much better she is doing. She plays again–something she hasn't done in months. We can't thank you enough for giving her a good life again.” - Arlene Jaster

For more information on treatment options, please click on our Soft Tissue Disorders page, or feel free to call (608-845-0002) or email us at: eso@edingersurgicaloptions.com . 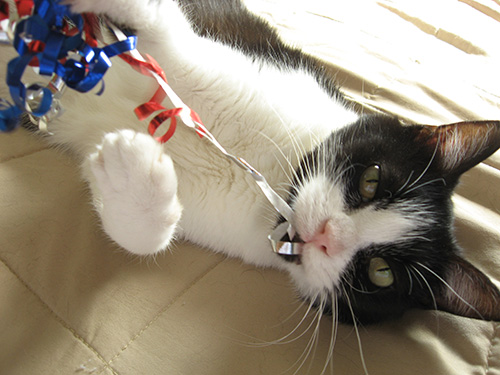