When Scruffy was found underneath a house in Tennessee, he had a broken left femur, a broken right tibia, and both of his cranial cruciate ligaments (CCL) were torn. It was October 2015 and he appeared to be about three years old. Fetch Wisconsin, a local rescue group, brought him to Wisconsin the following month.

Caregivers brought Scruffy to Edinger Surgical Options to see if anything could be done to fix his rear limbs. Although he was walking on both back legs, and appeared cheerful and ready to greet everyone, his physical exam revealed some neurologic deficits indicating there might be an issue with Scruffy’s spine in addition to the other problems with his back legs. X-rays of his back legs showed that the tibia fracture had healed on its own, the femur fracture had a non-union (bone ends were not connected), and that there was effusion (swelling) in both knees caused by the CCL tears.

Spinal x-rays showed a collapsed disk space at L3-4 (lumbar spine) along with calcification indicating an injured disk. A myelogram, an imaging study where liquid contrast is injected into the spinal canal, enabled x-rays to show the exact location of the injury. Scruffy had a hemilaminectomy, which is delicate back surgery that involves removing a section of two vertebrae to allow access to the spinal canal. This allows for the removal of damaged disk material to relieve pressure on the spinal cord. Scruffy went home the next day to rest and allow his spine to heal.

Six weeks after his back surgery, Scruffy was recovered enough to address the rest of his orthopedic problems. Arthroscopy was performed on both of his knees to remove damaged meniscal tissue and evaluate the damage in the CCL’s. Arthroscopy involves looking into a joint with a camera to evaluate the interior surfaces. It is less invasive than traditional ways of looking into a joint, and recovery time is shorter. A tibial plateau leveling osteotomy (TPLO) was performed on the left side, due to the steep tibial slope (33°). A TPLO diminishes the slope angle and stabilizes the knee. The right tibial plateau had a flatter tibial plateau slope due to the way the tibia healed from the previous break.

FasTak stabilization was performed on the right knee to stop cranial drawer. With this technique a strong line is secured between the femur and tibia using an absorbent screw. This technique works best in smaller breed dogs and when the tibial slope is relatively low. Scruffy went home the next day and his foster Mom worked hard to re-train his muscle and keep his exuberance controlled so that both of his knees could heal.

Another dedicated family adopted Scruffy three weeks after his knee surgeries, and continued the diligent work on muscle therapy to help Scruffy get back to his best on all of his legs. Three months after his very first surgery, he looks and feels great! Thanks so much to his dedicated team at Fetch Rescue!

For more information on disc disease and spinal disorders, please see our Intervertebral Disc Disease page, or feel free to call 608-845-0002 or email us .

For more information on TPLO’s and how they work, please see our Tibial Plateau Leveling Osteotomy page, or feel free to call 608-845-0002 or email us . 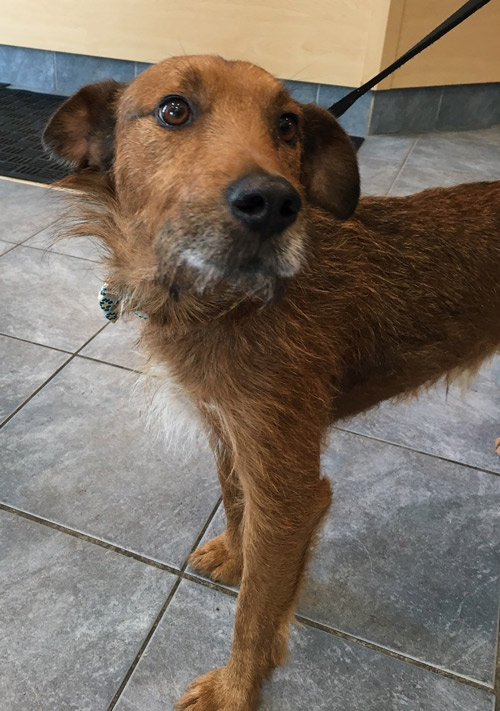